Whether you are in the music industry or not, there is a lot to be learned from artists with staying power. One that really made an impression on me was Harry Connick, Jr.

Most of the local bands and solo artists I’ve booked and coached are young. Harry is not in their repertoire, nor is he in mine. One summer, I worked at a beautiful outdoor venue in Cary, NC called the Koka Booth Amphitheatre.  I was introduced to Harry, his music, and his way of doing business.

There is nothing worse than waiting (and waiting) for an artist, guest speaker, or even a client who arrives really late.  There were no delays or “diva moments” with Harry and his band. They set up quickly and were ready to roll in no time.

Tip #2: Connect with Your Audience!

I had no idea that Harry Connick, Jr. was so funny! He not only connected with his audience from the stage, he came right out into the crowd – in between songs! I was stationed by the front seating area and he stopped by. He said he just needed a snack. So, he walked around and checked to see who had food and beverages that he liked and took some samples.

This was someone who knew how to be genuine. You felt like you could invite him over for dinner later.

At one point, Harry realized that there were quite a few empty seats up front and quite a few people sitting on blankets way in the back.  Harry didn’t care that the seats up front went for a higher price or that they may have been paid for. The point was, the show was underway and no one was sitting in them.

So, Harry took the microphone and told everyone in the back to move up front.  Technically, we weren’t supposed to allow him to do that but he had a point.  If the people who purchased the front row seats really wanted to be there, they would have been there. Why reward the no-shows when you have loyal fans right in front of you? Give them something extra!

When was the last time you challenged yourself and pushed past your comfort zone?  I hadn’t watched American Idol in ages but once I caught this funny video clip of Harry challenging contestants and his fellow coaches, I was hooked.

Yes, not every singer knows about music theory or the pentatonic scale but they should (note to JLo!).  Maybe it is over some people’s heads but Harry was right: People need to be challenged in order to grow. 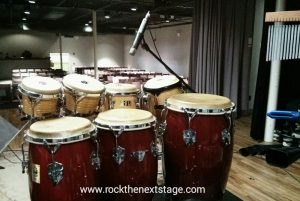 Money isn’t everything. If you hate what you’re doing, is it really worth it? Life’s short! Wouldn’t you rather use your talents, your skills, and your creativity to create something meaningful, worthwhile, and fun?

There were many local bands that I really enjoyed working with. They not only got the above points but, like Harry, their shows were really fun. Their fans weren’t just coming to hear the bands’ songs; they were coming because they knew they would have a fun experience. This photo is one of the things I do for fun. That’s my view from the stage.

Thanks, Harry, for reminding me to have fun and to not take life so seriously.

Dori Staehle, MBA is the owner and Chief Encouragement Officer at Rock the Next Stage. She is a business, success, and ADHD coach, speaker, percussionist, drum therapist, and occasional booking agent and Emcee. Dori is also the author of the best-selling book, Find Your Divine Rhythm: A Creative’s Success Formula. Dori did not book Harry that night, nor did she lose her job for allowing him to break the rules. Sometimes you have to lighten up and have fun!

If you’d like to talk more about moving your talents or your business onto the next stage, click here for a complimentary, 30-min. consult.