This week’s post is courtesy of the lovely and talented Alice Osborn! Alice is a poet, author, writing coach, editor, speaker, and performer who is based in Raleigh, NC.

Wouldn’t it be fantastic if you could automatically connect with your audience every time? Well, you can, even if you weren’t the most popular kid in school.

Back in May 2014 I saw singer/songwriter Rob Thomas perform in Durham, North Carolina, and the guy knows how to connect with his audience! He should! He’s been in the public eye since 1998 when Matchbox Twenty’s hits “3 A.M.,” “Push,” and “Real World,” hit it big. Rob’s had two solo albums since then and is currently working on a third coming out January 2015. It’s no secret to anyone who knows me I’m a huge fan of Rob Thomas—in fact I’ve met him twice in person—and the reason he has so many hardcore fans (besides me) is because he consistently does these five things:

1. Use humor. Rob mixes up his songs with stories. Please get this guy an HBO special! At his show he shared the “behind the music” for his songs, revealing to those who didn’t know that “3 A.M.” was about his mom who was struggling with cancer when Rob was 12 and “Little Wonders” is about his late dog, Tyler, who was in such a good mood about life, while his master wasn’t. Rob’s humor is effective because there’s so much truth in it.

2. It’s OK to make mistakes. Now I’m not saying be unprepared and incompetent, but it’s OK to make a boo-boo and then say you did so. Rob had a timing issue and also hit a wrong note. Both times he said, “Hey, that was bad. I believe in full transparency,” which made his audience love him even more. Doing so helps make you more real to your audience!

3. Give your audience what it wants. Speakers always need to consider what’s in it for the audience. Rob Thomas knows his audience wants to have fun as well as hear both his solo hits as well as his hits with Matchbox Twenty. He delivered and also played a few songs on piano—his main instrument. He only played one new song and didn’t play any songs from the new Matchbox Twenty album, North, which sucked. I was amazed that it was totally cool to take flash photos and record the event. After the concert, Rob stuck around and signed autographs by the loading dock and made sure everyone got a photo and signature before he departed. I could see that his handlers were getting antsy. But you don’t have to pander to your audience. When an audience member shouted out a request to Rob, he said, “This isn’t request hour; it’s the shut up and listen hour!”

4. Share vulnerabilities. Before he started playing on the piano, Rob shared that it was tough growing up in South Carolina in the ‘80s when boys his age were all about guns, cars and sports. He sported a Billy Idol punk hair-do and said everyone thought he was gay. However, he knew how to play piano and sing Lionel Ritchie songs and used these skills to his advantage at house parties to pick up girls. Rob also shared how he collaborated with Mick Jagger and how Jagger must have thought Matchbox Twenty’s commercial success was “cute” since they only sold 20 million records. Sharing your weaknesses allows your audience to see the real you.

5. Be authentic and grateful. Your audience will know right away if you’re phoning in your performance and going through the motions. Give every gig 110% even if you’re not getting paid or if your audience has three people in it. This was my third time seeing Rob in concert and he keeps getting better and better. He’s so generous and grateful for his fans. In fact, he looked me in the eye when he signed his autograph and said, “Thank you.”

I also want to add that Rob Thomas and his wife, Mari, run The Sidewalk Angels Foundation, their non-profit which supports and funds grassroots no-kill shelters and animal rescues all across the country. All of the profits from the T-shirt sales went directly to his non-profit—it’s so important to give back!

Guess who’s going to be the first in line when his new album comes out? 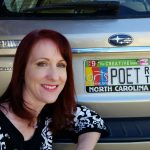 Alice Osborn’s past educational and work experience is unusually varied, and it now feeds her work as a poet, as well as an editor-for-hire and writing coach. In past decade, Alice has taught classes and writing workshops to thousands of aspiring authors of nearly all ages from 9 to 90 both around the corner and internationally. She’s putting the finishing touches on her upcoming poetry collection, Heroes without Capes. After the Steaming Stops is her most recent collection of poetry; previous collections are Right Lane Ends and Unfinished Projects. Alice is also the editor of the anthologies Tattoos and Creatures of Habitat, both from Main Street Rag. A North Carolina Writers’ Network board member and a Pushcart Prize nominee, her work has appeared in the News and Observer, The Broad River Review, The Pedestal Magazine, Soundings Review and in numerous journals and anthologies. When she’s not editing or writing, Alice is an Irish step dancer, and plays guitar and violin. She lives in Raleigh, North Carolina, with her husband, two children and four very messy and loud birds. Visit Alice’s website!