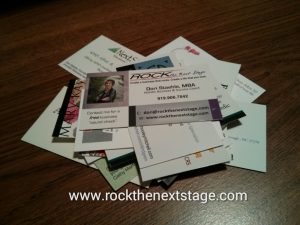 As an entrepreneur, I attend a lot of networking events each month. Some remind me of speed dating – with business cards. Everyone is dressed up, has their “elevator pitch” down cold, and seems really successful.

If you ask them “How are you doing?” you’ll usually get the response of “Fine, thanks!” or “Never better!” However, for some of them, their eyes tell another story. It may be a brief flash of panic or they may quickly look away. That’s because they don’t want you to know the truth. They’re struggling.

Fake It Till You Make It!

Ah yes, the musician’s credo: Fake it till you make it!  This means that if you flub a note, a chord progression, or a beat, don’t stop! Don’t wince, don’t shake your head, or do anything to let the audience know you messed up. Just keep going like nothing happened and hope no one noticed.

This saying isn’t good advice for entrepreneurs or really anyone, actually. It’s also not healthy. It means you’re stuffing down your feelings and you’re in denial. Some of you may know that I’m still recovering from a freak accident that occurred over 2 years ago.  I keep pushing on and try to ignore the pain. Like they say, “The show must go on.”

When recently asked what helps relieve the pain, I responded “Denial. And red wine.”  Bada boom! Hey, I’m a drum chick. You’ve got to go for the rim shot whenever possible.   😉

So, are you in denial? How’s that working for you? 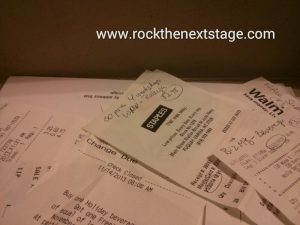 Some entrepreneurs don’t realize how they’re doing because they’re not keeping track of their finances.  Some have all their receipts stuffed in a shoe box. They’ve never taken the time to do a spreadsheet, use accounting software, or hire an accountant. It’s not until tax time comes around that they say “Is that all I made?!!”

And then the panic, doubt, fear, and embarrassment set in. Others know they’re not doing well because they have few, if any clients or sales.  Anxiety and depression slowly start to set in. They may not know they’re on that road yet. They just know something doesn’t feel right. They’re spinning their wheels but they’re not getting ahead. They have many sleepless nights. Maybe they’re having panic attacks.  They go to networking events thinking that they are a failure and that they’re all alone. But they’re not.

I began asking entrepreneurs how they were really doing because I was having trouble getting back on track after the accident. I left my physically-demanding job without any prospects. I didn’t give myself sufficient time to heal. I just hit the ground running and feverishly tried to resurrect my former business. But it wasn’t working.

Eventually, I became overwhelmed, exhausted, and embarrassed. I could tell I was headed down that very dark road. I wanted to know if I was alone. I found out that many entrepreneurs feel this way. It’s just that no one wants to talk about it. I think it’s time.

Dori Staehle is a holistic business and success coach with Rock the Next Stage. She specializes in helping people who are 40+ get unstuck. She also offers drumming for health, healing, and stress relief for all ages and genders. Dori is a “Drum Chick with an MBA”. She also has certificates in Christian counseling, drum therapy, and therapeutic drumming.